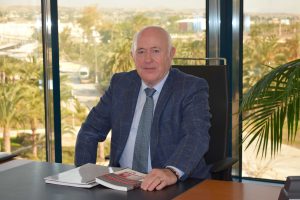 President of the Board of Trustees of the Miguel Hernández University of Elche.

The Board of Trustees is the university collegiate body for society’s participation in the university. Its aims are to achieve greater quality in teaching, strengthen its research capacity and boost the social, economic and cultural progress of society.

Through the Valencian Government Law for Board of Trustees of the Valencian State Universities 2/2003 of 28 January, the Valencian Community regulates the composition and functions of the Board of Trustees, and the designation of members from among personalities from cultural, professional, economic, labor and social life who cannot be members of the actual university community.

Nevertheless, members comprising the Board of Trustees are the Rector, the Registrar and the Manager as well as one teacher, one student and one representative from the administration and staff, chosen by the Executive Board from among its members.

The relations between the Board of Trustees and the other collegiate or unipersonal entities of the University will be governed by the principles of coordination, collaboration and loyalty to the university as an institution.

Any cookies that may not be particularly necessary for the website to function and is used specifically to collect user personal data via analytics, ads, other embedded contents are termed as non-necessary cookies. It is mandatory to procure user consent prior to running these cookies on your website.